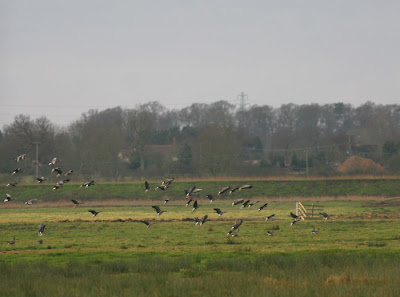 It was supposed to be sunny today, so we went to Norfolk. Started off in the Yare valley at Cantley, where plenty of White-fronted Geese were on the meadows with a sprinkling of Magic Bean Geese. The views of the Beans were much better than my last ones of this species - in pea-soup fog at the Nene Washes.

If there had been any daylight the photos might have been better, but the day had started well.

Next stop was Gunton Cliff for the Pallas's Warbler. Wasted a lot of time there - it wasn't seen at all. Tried Ness Point, Lowestoft, for Purple Sandpipers, but there were none to be seen. It was looking quite bleak.

(I feel sorry for Lowestoft - it used to be very prosperous with shipbuilding and fishing industries, which my ancestors were part of - but now it's a bit of a dump. Ness Point is the easternmost point of the British Isles, but they don't make much of it. The point sits next to an industrial estate, a gasworks, and a huge wind turbine under construction)

In the end we abandoned Suffolk and made for Norfolk, where we enjoyed the buntings - Snow and Lapland - at Salthouse. By the time we decided to try for the Ross's Geese at Holme, it was getting dark and the geese had cleared off.

Email ThisBlogThis!Share to TwitterShare to FacebookShare to Pinterest
Show me more: white-fronted goose

Everyone else has video on their blog these days, so I thought I'd have a go. I was lucky that this Sparrowhawk perched on the garden fence after trying - and failing - to catch a Blackbird. It's a bit dark but it's not turned out too badly, considering it was digiscoped through a window, and the old Coolpix isn't really ideal for video...
Posted by Katie at 16:13 1 comment:

Another bird of prey doing not very much, this time a Kestrel. They fly past quite often but I haven't seen one perching on the fence before. The Blue and Great Tits weren't very impressed.
Posted by Katie at 16:11 No comments: 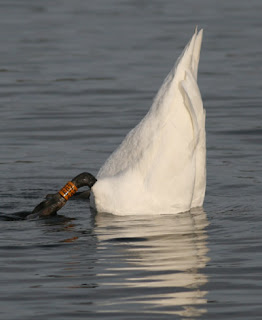 Had a terrible day trudging round various bits of Bedfordshire. We dipped on everything - Cattle Egret (in Cambs), White-fronted Geese at Harrold, Short-eared Owl at Thurleigh.

While bored at Harrold, I spotted this ringed Mute Swan. It's always worth checking birds for colour rings. I expect it's moved a total of zero km since it was ringed, but I've sent my sighting in to www.ring.ac anyway.

Staring bleary-eyed out of the window this morning, something caught my attention. There was a bird on the garden fence. A closer look revealed it was a sparrowhawk, a young male.

There was something very odd about him. He appeared to be wearing slippers like one of my next-door neighbours used to wear in the '80s (you perhaps know the kind: black, fluffy and trimmed with feathers). Around each foot was a tangled mass of dark, downy feathers, and some bits of grass...

Read the whole post here
Posted by Katie at 16:02 No comments: