Back from a long weekend in Norfolk, in which we enjoyed different climatic conditions to the rest of the region. Winds blew mist in off the North Sea and kept the cloud cover to 100% for much of the time. The result was we didn't suffer the sweaty heat that everyone else did, though it was still fairly humid.

The beach at Titchwell

We camped at Reedham, right next to the Yar, and not far from Strumpshaw Fen, where we started Saturday.

There were orchids-a-plenty. This might be a Southern Marsh Orchid, or apparently it could be a hybrid. I have no idea. To me it's just a pretty pink flower.

Loads of butterflies about, with Small Tortoiseshells most common

Next, Upton Broad, a Norfolk Wildlife Trust reserve. Here we skored Swallowtail butterfly - a mighty impressive beast, the first I've seen since a holiday to France when I was 11! - Norfolk Hawker dragonfly and...

What appears to be a Variable Damselfly

Lots of Large Skippers, too.

Another pink flower, which might be Herb Robert. Remember, I don't know anything about plants
After that, we went up to the north Norfolk coast, which was somewhat less productive, but still enjoyable: Ruff, Spotted Redshank, lots of cute, fluffy Avocet babies

and a Hobby being mobbed by a Black-headed Gull

Today I've been to Bempton Cliffs, on Yorkshire's east coast. Took a lot of photos; deleted a lot of photos. Here are the excuses: camera ignorance; too much sun; birds too white; birds too fast; grass too long; sun in wrong direction. Etc etc etc.

Whingeing aside, it was fantastic. As we arrived, a party of schoolchildren was doing the same. 'Wowwwww!' they went, which is the correct response. The air was full of birds of different sizes; it's hard to get a feel for the height of the cliffs, but the tiny specks on the sea below - auks and Kittiwakes - give an idea of scale.

The sight of Guillemots, Razorbills, Gannets and Kittiwakes wedged onto tiny ledges, high above jagged rocks and rushing waves, never fails to boggle the brain.

The most common human 'call' is 'Is that a Puffin?'

It also smells a bit, but you get used to that quickly.

Here's Bempton, the movie (with sound). Prepare to be underwhelmed by my camera work once more...

Female Emperor laying eggs on the pool at The Lodge


I saw the first ever dragonflies to emerge from our garden pond this morning - Common Darters.

I spotted this newly-emerged damselfly trapped in a spider's web, so I rescued it while the spider wasn't looking. Not sure what it is - maybe Small Red-eyed?

Broad-bodied Chaser and its wing

photos taken with Canon Powershot A640
Posted by Katie at 21:36 No comments:

Email ThisBlogThis!Share to TwitterShare to FacebookShare to Pinterest
Show me more: broad-bodied chaser, damselfly, The Lodge
brought to you from Sandy, Bedfordshire, UK

An early(ish) start this morning saw us gathering information for the Bedfordshire Bird Atlas... in Northamptonshire.

Since the 10 km square sits on the border between the two counties, records from it can contribute to both. Or something. Anyway,  our allotted patch was around Newton Bromswold. We were after any birds showing signs of... well, anything. Found Spotted Flycatcher, Whitethroat, Buzzard, Wren, Swallow, Moorhen, Whitethroat and all manner of exciting things.

We might have found even more, were it not for a Longhorn bull, his cows and calves which were in a field. They blocked our route to the opposite side of the field, so we opted out. That was after we'd negotiated the live electric fence which ran round the perimeter, including the stile! Ouch!

The butterflies were better than the birds, on the whole. An area in an environmental stewardship scheme held loads of butterflies - more than I've seen all year so far. Large Skippers, Meadow Browns, Ringlets and Common Blues ran riot. There were pleasing numbers of Small Tortoiseshells, too.

Before you accuse me of turning into a church-spotter...

...it was lovely to see the village churchyard was being managed sympathetically. Someone in Newton Bromswold cares about wildlife. There were patches of long grass, nestboxes on the trees and these Common Spotted Orchids. It was full of life.

And, unless I'm mistaken, this is a young Ostrich. There wasn't room for it on the survey form, though. Oh well.

And in the garden

This Six-spot Burnet moth was a garden tick. Which reminds me, really must get mothtrapping started again.

A male Green Woodpecker brought his fledgling offspring to the garden yesterday (excuse the fuzzy images, they were taken through the window)

Bumblebees are lapping up nectar at the moment

The Badger has been back every night so far since we first noticed it on Tuesday. 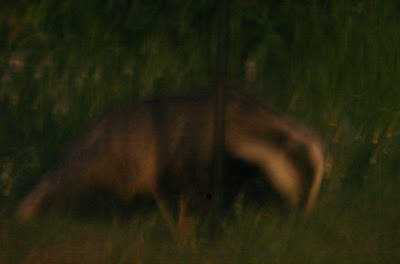 Appalling photo, exposure of 2.5 seconds and 1600 ISO! But you can see what it is...
After last night's badger-related excitement, tonight we were prepared. Turned the dining room and back bedroom lights on - to illuminate the garden - and stood in the dark kitchen, waiting.

At around 10.40 pm I saw movement in the darkness and a Badger squeezed under the fence and strolled calmly up to the area I'd baited with a few sunflower seeds (since we guessed that's what it had been eating before).

It spent the next two hours feeding in the garden.

The Badger must have been doing this for a while. It looked as cool as a cucumber. It snuffled around, apparently oblivious to our presence in the house. It spent most of its time lying down, stretched out like a dog as it fed among the clover, totally chilled-out.

A few times it had to stand up to scratch itself, and once it did that thing like they do on Springwatch, where they lie on their backs and scratch their tummies. It didn't fall off any logs as we haven't installed any yet.

I'm pretty sure it must have polished off all the seeds I'd put out. Inspection this morning showed it hadn't been digging. So I did a bit of research and it looks likely to have been eating earthworms from the surface.

While researching Badger eating habits, I found the Badger Trust website, and this very-cute-but-also-rather-surreal video. Who could resist them? Enjoy.

Email ThisBlogThis!Share to TwitterShare to FacebookShare to Pinterest
Show me more: badger, garden

D was sitting on the back step, smoking and watching a Barn Owl float by, when he suddenly spotted movement in the dark underneath the bird feeders.

Is that a Pheasant? he thought...

'And then I saw it had a black and white face! A badger! I can't believe it!'

This is the first time a Badger has been seen in the garden. A cause for celebration. We've seen them not-too-far-away but never on our premises. I was more than a bit sceptical when I read that one in ten participants in a recent RSPB survey had seen badgers in their gardens, but maybe it is true!

In other news, a Lesser Whitethroat was heard singing distantly this evening, thus adding itself to the number 93 slot on our garden bird list.
Posted by Katie at 23:21 1 comment:

Email ThisBlogThis!Share to TwitterShare to FacebookShare to Pinterest
Show me more: blue-tailed damselfly, The Lodge
brought to you from Sandy, Bedfordshire, UK

They're not orange anymore

Another visit to the banks of the Great Ouse at Roxton. I nearly didn't go because it looked like it was about to rain. But...

Female Scarce Chaser
(Well, there's only a little bit of orange on some of the females now)

While butterflies included this Large Skipper

There were quite a few Harlequin Ladybirds getting busy, too...


Compared to the last couple of times I've been there this year, Scarce Chasers have now become harder to find. They're not orange anymore, and they weren't perching quite so prominently. Maybe they're busy with other things...