I love spring evening light. OK, you probably get it in summer and autumn as well, but maybe it's that I notice it now, while I appreciate the lengthening evenings most.

This evening I was standing in the garden by the pond. Yep, you guessed it, I was watching newts (two Great Cresteds were lurking in there). Next, I turned my attention to the Swallows twittering overhead when they suddenly sounded scared and agitated (it's great when birds tell you that other birds are nearby. You just need to learn to understand them).

Eventually I traced the source of their irritation to a pale shape swooping along, just up the road. Great! I thought. Barn Owl. It reappeared after a couple of minutes. Went out of sight, then popped up right in front of me. It got within about 15 feet - silently - before clocking me and swerving away. I was annoyed I'd disturbed his hunting, but it turned out for the best.

The owl turned towards the road verge (living dangerously, but it's where to find food). He hovered for a split second before folding back his wings and diving headfirst into the cow parsley. After 30 seconds, he flew up again, carrying a fat vole. It was perfect.

One of the ponds on the heath at The Lodge is full of Smooth Newts up to all sorts at the moment. You can look right in and watch them swimming around and even get reasonable photos. There seemed to be lots of chasing going on today...

Email ThisBlogThis!Share to TwitterShare to FacebookShare to Pinterest
Show me more: smooth newt, The Lodge
brought to you from Sandy, Bedfordshire, UK

First damsel of the year!

A Large Red Damselfly basking on some nettles at The Lodge this lunchtime
photos taken with Canon EOS 30D + EF 300mm f/4L IS USM
Posted by Katie at 22:25 No comments:

Email ThisBlogThis!Share to TwitterShare to FacebookShare to Pinterest
Show me more: large red damselfly, spring, The Lodge
brought to you from Sandy, Bedfordshire, UK

I entered an alien world this afternoon. After ordering a pond dipping kit from Alana Ecology about a month ago, I felt the time was right to put it to use. Here are some of the mindboggling creatures I found.

Baby Backswimmer - a perfect minature version of its parents, but about 3mm across

What's this? A Caddis Fly larva? The rolled up thing it lives in is about 35mm long. Comically, it swims around the pond inside its little tube. If you know what it is, please leave a comment
More photos on Flickr

If you have a garden pond, all this can be yours for about £15. Do it, you won't regret it!

photos taken with Canon Powershot A640
Posted by Katie at 20:11 5 comments:

The pond
Now the days are longer and the weather (slightly) better, I've been spending time by the pond again. For the past two or three weeks, 'our' Great Crested and Smooth Newts have returned.

The water's still clear, so it's possible to watch them with binoculars without disturbing them, which is great fun. The Smooth Newts are easier to see, favouring the shallower water, while the Great Cresteds lurk in the deep and only come up for air every 15 minutes.

I love watching them swim about. The Smooth Newts in particular seem to live in their own watery world, floating around with their little legs sticking out at right-angles.

Watching them 'hunting' is intriguing. Through binoculars, you can see them lining up a morsel of food - perhaps a mosquito larva. It wiggles, tantalisingly, in front of the newt's nose. The newt prepares to make its move... but often it seems that the larva is ahead of the game and makes off just before the newt prepares its explosive burst of speed.

I'm getting better at newt identification now. Telling male from female Smooth Newts is fairly straightforward - mature males have a jagged crest from head to tail, looking a bit like a mini Stegosaurus, or an aquatic crinkle-cut chip. The females are... Smooth, looking more like a lizard.

We seem to have some huge female Great Crested Newts in the pond, bulging with eggs. The males follow the females around and swim in front of her, sometimes even lashing them with their tails. Not very romantic.

So, now that I've turned into a newt nerd, I decided I needed to learn more about them. And that's why I went to Ramsey Heights yesterday for 'An Introduction to Great Crested Newts'. We weren't introduced personally to any newts, but I learned a lot. An afternoon in the classroom was followed up with practical newt surveying - shining torches into the pools where they live. You need a licence to do that, but it gave me a taster of something I'd like to find out more about...

photos taken with Canon Powershot A640
Posted by Katie at 10:47 4 comments:

Rooks waiting for a shower of black sunflower seeds from above. Good job we switched from sunflower hearts at this time of year - they're much more expensive and you can fit a lot in a Rook...
photos taken with Canon EOS 30D + EF 300mm f/4L IS USM, through double-glazed kitchen window
Posted by Katie at 09:24 2 comments:

Email ThisBlogThis!Share to TwitterShare to FacebookShare to Pinterest
Show me more: garden, rook

Good job this morning's thick fog cleared up, because I had a day off work. I ended up at Waresley Wood for a wander around. Things got off to a bad start when I realised the memory card from my big camera wasn't where it should have been... it was at home, still in the card reader.

It didn't matter too much, as there was plenty to enjoy: loads of fresh, bright green leaves, Bluebells and Lady's Smock in bloom; bee-flies and bumblebees buzzing; Orange-tip and Peacock butterflies flitting about; Bullfinches peeping, Robins singing and Sparrowhawks causing havoc.

Migrants were conspicuous by their absence. I'd at least expected Blackcaps to be singing, but heard only a couple of Chiffchaffs. Where are they all?

photos taken with Canon Powershot A640
Posted by Katie at 21:16 2 comments:

Email ThisBlogThis!Share to TwitterShare to FacebookShare to Pinterest
Show me more: Beeston, orange-tip, ringing, starling
brought to you from Beeston, Bedfordshire, UK

Marsh Marigolds in the pond

Cheeky Robin at The Lodge

Email ThisBlogThis!Share to TwitterShare to FacebookShare to Pinterest
Show me more: daisy, marsh marigold, robin, spring
brought to you from Sandy, Bedfordshire, UK 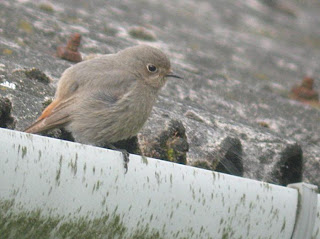 There I was, minding my own business and labouring on the vegetable plot that doesn't contain any vegetables yet. Something made me pause and look up into the tree by the fence. There was a silhouette of a small, round bird which I thought would turn out to be a Robin.

That's funny, I thought. Its tail is quivering. Better keep an eye on it.

Foolishly, I'd left my binoculars in the kitchen while I thought I'd be busy with the garden fork and spade. I watched the bird fly off a short distance, and legged it inside to get the bins. I then had to wait a couple more minutes, while the bird was out of sight, to confirm which kind of redstart it was... Black Redstart!

Well, that was an unexpected garden tick...

Today we spent the day around the Brecks.

At Santon Downham we heard a Lesser Spotted Woodpecker drumming, but Did Not See It

At Mayday Farm, we Did Not See a Goshawk (or much else)

At Lakenheath Fen, we Did Not See a lot either. There are 70 pairs of Bearded Tits in there. We heard only two. Still, it was a pleasant walk, and we did see three Garganey, so mustn't grumble

I'm back from four nights in Tarifa, southern Spain. I didn't take as many photos as I wanted, but there are a few nice ones, I hope you'll agree.

We were a bit early for butterflies, I think. There were plenty of (migrant?) Painted Ladies about, and a couple of unidentified whites, but apart from that, we saw a couple of Spanish Festoons, some Wall Browns and a single Large Copper (I think) at Baelo Claudia

This mirador (viewpoint) on the main road between Algeciras and Tarifa was a superb place to watch birds of prey and other big things arriving from across the Strait.

On the way from the airport, we stopped awhile and saw dozens of Booted Eagles coming inland, plus Montagu's Harriers, Sparrowhawks and White Storks. I can also recommend the coffee

A thunderstorm over the mountains near La Janda

Lots of wildflowers growing on the roadside

We went whale-watching with Turmares in the Strait of Gibraltar

The two-hour trip cost €30 and was money well spent. We sailed out towards from Tarifa towards Morocco and cruised around, looking for cetaceans. We struck gold, and found a total of 15 Pilot Whales, including a calf, and about 10 Bottle-nosed Dolphins.

Seasoned whale-watchers Del and John said the views of the Pilots were the best they'd ever had, as they rode our bow wave (the whales, that is) and breached full-length out of the water in front of us! One of the dolphins in particular was a proper show-off, tail-slapping the surface and sending a jet of water our way.

We'd stationed ourselves right at the front and got a bit wet, but it was nothing short of awesome to watch the whales and dolphins about 10 feet below us. Sometimes the dolphins turned on their sides to have a look at us and the sea shone turquoise on their white stripes.

Flipper, eat your heart out.

It was also pretty special to see migrating birds. As well as the expected Cory's and Balearic Shearwaters, we watched two Montagu's Harriers and a Hen Harrier crossing the Strait. It looked hard work... the birds had to keep flapping or they started to drift seawards...

Unfortunately, no photos cos it was a bit bouncy and I was a) concentrating on enjoying the superb views, and b) hanging onto the side.

I got quite used to having a roof terrace...

We rented an apartment overlooking Plaza San Martin, in Tarifa's old town. A fantastic place to stay, clean, well-equipped, tastefully decorated (in contrast to the others' '70s nightmare fleapit) and handy for all local amenities - shops, seafront, restaurants, bars... I'd definitely stay there again.

Screaming Pallid Swifts and squawking Lesser Kestrels overhead were the icing on the cake.

Pallid Swift over said terrace. Took lots of shots, but they were flipping difficult

We made a couple of visits to a mountainside somewhere above Bolonia, on the Atlantic coast. Another good place for watching migration - eagles, harriers and Bee-eaters. Nearby were cliffs with a couple of Griffon Vulture nests, singing Blue Rock Thrushes and the wonderful Spanish Festoon.

At Baelo Claudia, the remains of a Roman fish-sauce factory.

Well worth a visit, for the Black-eared Wheatears alone, and it was also quite interesting. And free. Baelo Claudia was famous throughout the ancient world for its garum - the fish sauce that Heston Blumenthal tried to make
More photos are on my Flickr account